September started to show the dramatic downward shift I’d been anticipating, which was not entirely devastating since it was expected. But, it does prove that all success is finite and that if I want to continue making money as an author than I’m going to have to do the most obvious thing, which is keep writing. Which…I’m struggling to do right now while I’m in school. The good news is that I’m getting caught up on homework and will soon have lots of time–more time than I originally anticipated (due to quitting my full-time job and whatnot)–to finish TGIB series and move on to NEW projects!! But those things are still a long ways off (I’m shooting for a March 2016 release for TGIB book 4) and there’s still a TON of work to do in the meantime. Since it’s likely that I won’t have a new book for sale for another 5ish months I’m trying to research ways to break into more international markets. My success in the UK sort of just happened, which means that I’m not exactly sure how to replicate it. But my sales in territories like Canada, Australia, and India have slowly been on the rise and even though they’re somewhat minuscule at present I know that if they pick up I’ll have a stronger financial foundation to support future projects. I just have to figure out how to make that happen. So, if anyone has any resources–blog posts, promo sites, etc.–that talk about breaking into international markets, please share them and I’ll be sure to do the same!

Better late than never! July was steady and actual sales remained pretty level throughout the entire month. Downloads finally started to trickle downward but it makes sense if you think about the fact that most working indie authors publish something new about every six months in order to make a living. The first three months after I changed the tags on my books my sales and downloads rose at a constant rate. Ever since I hit the three-month mark at the end of July both sales and downloads have been on a slight downward slope. I’m anxious to see at what point sales trickle out altogether or if they ever do. Since book four in TGIB series won’t be out until 2016 I’m hoping sales will at least hold long enough to make 2016 the YEAR OF BEING A REAL LIFE ACTUAL AUTHOR! I’ve got a specific number in mind that I’ll need in order to make that happen but even if it doesn’t, at least I know that once I have more time to write making a reasonable living will actually be possible. And more good news, now that my first semester of grad school is over I’ll actually be able to tend to this blog, which has been severely neglected. Well…for two weeks until the next semester starts again.

The upward trend has finally steadied and all I can do now is keep my fingers crossed that this journey isn’t nearing the end. I have a total of six books out but only one series and I know that taking advantage of my current momentum is the only way to keep it going. That’s why the most successful indie authors are putting out something new every six months in order to counter the ebb and flow of their sales. But I’m in school full time and I work full time and every day it gets harder and harder to show up and waste 9 hours of my life when I could be writing. But I have to be patient. I’ve never experienced success like this before and I’m not sure how long it will last. I need to be sure that it’s sustainable before I make any life-changing decisions.

If you’re an indie author who’s already made the decision to write full time how did you finally make that decision? What benchmark or end goal were you aiming for before you finally decided to take the leap? I think the smartest thing to do would be to monitor my progress for the next 6 months (6-8 months being the average amount of time it takes me to complete a novel) and see how much my sales fluctuate and how greatly they’re effected by a new release (specifically TGIB book 4, which I hope to release in spring of 2016). I hate reducing this experience to numbers but I can’t get ahead of myself. I have to be smart. I have to be patient. Very. Very. Patient…

May was one hell of a month

Sometime around the end of April Amazon finally price-matched The Girl In Between and made it free on Amazon UK. Since then downloads have skyrocketed and sales for the other books in the series have steadily grown. Like…a lot.

Amazon even put a cute little “Best Seller” flag next to the sequel!

The Girl In Between and The Boy In Her Dreams have both hit number 1 in several categories over the past week, which is the result of over 15,000 downloads and 1,000 copies sold.

Looking at the rankings for The Boy In Her Dreams, I’ve concluded that you need to sell between 30-50 books a day in order to chart on one of Amazon’s bestsellers’ lists. I had a few days this week where my sales reached 100, which I have to credit for pushing the book into the number one spot on the lists below. 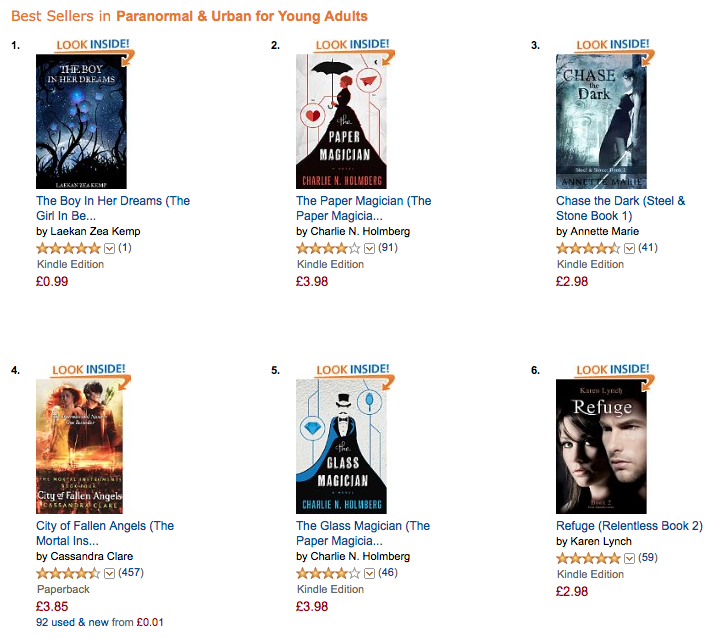 Yes, that is THE Cassandra Clare stuck at number 4. And do you see who just so happens to be battling me for first under Teen & Young Adult Paranormal & Urban Fantasy in the screenshot below? Yes, that would be THE Veronica Roth. For approximately 24 hours I’ve actually been BEATING her in the Paranormal and Urban Fantasy category!!!!!

As you can see May has been total insanity. In a good way. In the BEST WAY! Thank you UK readers!!! THANKYOUTHANKYOUTHANKYOU!!!! You’ve made my dreams come true. It was just last year that I was barely managing to sell a few copies a month and for the past week I’ve been selling 50+ books each night in my sleep. It’s thrilling and wonderful and magical and I can’t believe this is actually happening. Thank you to everyone who has made this possible. Thank you for taking a chance on my books, for devouring them, for loving them, for sharing them with your friends. Thank you for supporting independent art and the daring individuals who choose to make it.